Tonga's Minister for Health Elected to the WHO Executive Board

Tonga’s Minister for Health Hon. Associate Professor ‘Amelia Afuha’amango Tu’ipulotu has been elected to the World Health Organisation’s (WHO) Executive Board at its meeting held remotely on Friday 22 May 2020.

According to the WHO website, the Executive Board is composed of 34 persons who are technically qualified in the field of health, each designated by a Member State that has been elected to serve by the World Health Assembly. Member States are elected for three-year terms.

The first item on the Executive Board’s 147th meeting agenda was the Election of the Chair, Vice- Chairs and Rapporteur before the auspicious meeting proceeded.

The Board meets at least twice a year; the main meeting is normally in January, with a second shorter meeting in May, immediately after the Health Assembly.

The main functions of the Executive Board are to give effect to the decisions and policies of the Health Assembly, to advise it and generally to facilitate its work. 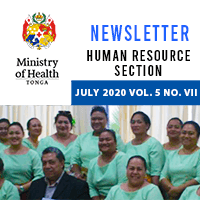